It seems that potlucks have been the theme of the week.  The first was by bike and part of the Pedalpalooza extravaganza.  The idea behind the Pedal Picnic Potluck was to assemble on Alberta Street and then bike 3 - 5 miles to an undisclosed city park for a potluck.  On Tuesday I joined over twenty bikers who followed our leader, meandering through Northeast Portland, resisting the temptation to ask him where we were going.  I am quite used to biking by myself, but I have been enjoying the empowering feeling of cycling with a group. 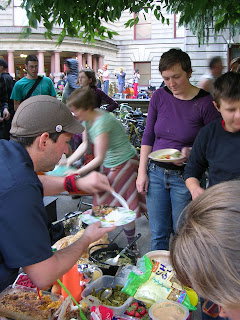 We crossed the Broadway bridge and entered downtown Portland.  We arrived at City Hall for the Carfree Cities Art Show Opening.  It was quite the scene for a potluck.  Two guys were welding a tall bike together, there was live music, and the Sprockettes were dancing.  We borrowed a table from a group of artists and spread out our goodies. 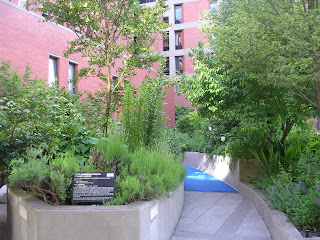 The next day I took Trimet to Northwest Portland to join the Adventurous Young Mazamas for a Evening Ramble and dessert potluck.  Before joining my Mazama friends I stopped at my favorite place in Northwest Portland, the Healing Garden at Good Samaritan Hospital.  This place is a serene oasis in the urban concrete desert.  There are beds of roses, native plants, perennials, and many others.  On many levels this place has a special place in my heart. 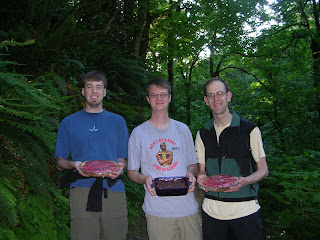 Our hike started along the Lower Macleay Trail and passed through the Balch Creek Canyon.  Here the foliage is thick and green and the trail is lined with large fir trees.   After passing a interesting stone structure, we continued up the Wildwood Trail to Pittock Mansion.  What made this hike interesting was that I was carrying a Strawberry Pie most of the way up.  It certainly was worth the effort, since that pie was sweet and tasty. 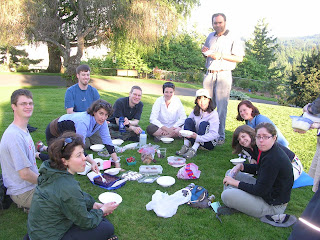