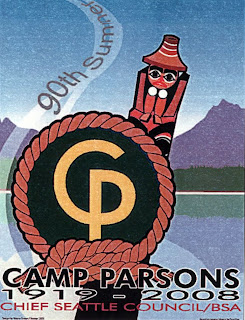 This weekend I participated in the celebration of the 90th summer of Camp Parsons.  The first part was a dinner Friday evening at the Museum of Flight near Boeing Field.  There must have been two hundred people in attendance.  We have often talked about the Power of Parsons, how our experiences and relationship at this camp have left a deep mark in our psyche.  The fact that former staffers have come from Oregon, Idaho, Texas, Massaschuttes, and Alaska serves as evidence of this.   There was one person in attendance that had attended camp in 1925!  Anyway, it was overwhelming to catch up with some many people, some of whom I had not seen for 15 years.  I also got a pleasant surprise when I saw my favorite high school English teacher, who was a staffer in the 1970s.
The program included a wonderful meal, followed by a speech by Parsons staff alumnus Dan Evans, who was Washington State Governor and United States Senator.  Governor Evans shared some stories about climbing in the Olympics Mountains and taking the boat from Seattle to camp.  Although there is an approximate forty year difference between my tenure at camp and that of Governor Evans, I could strongly related to his experiences.  In addition to an audio/video presentation, there was a performance of the song 'Cows with Guns'.
Saturday morning I drove to camp to continue the celebration.  I took the Washington State Ferry from Edmonds to Kingston.  Along the journey I passed through the town of Port Gamble, which was deep within a Civil War Reenactment. 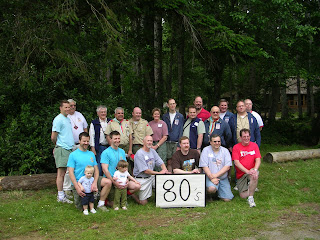 At camp the celebration consisted of a picnic lunch, Staff and Camper Pictures by decade, and a dedication of a new Arboretum.  However, the most meaningful part of the weekend was spending time with my brethren.  Whether reliving memories, meeting the children of my fellows, or just hanging out in Queets cabin, I think it is the relationships that is really the secret sauce of the Power of Parsons. 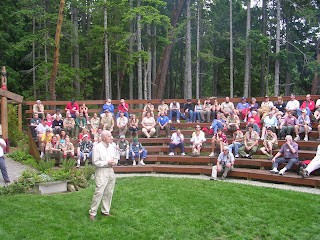 The weekend did not end as I pulled out of the camp parking lot.  Sunday I hiked along the South Fork of the Skokomish River with my Parsons friend Scott and his girlfriend Kristine.  Due to hidden Forest Service Road markers it took awhile to get to the trail head, so we passed the time by playing One Fat Hen.  Once we got on the trail we were treated to a wonderful walk past gigantic Douglas Firs, Western Red Cedars, and Silver Firs.  Even the Trillium flowers were big on this hike.  After 2.2 miles we hit deep snow, which seemed like a good place to turn around.
Posted by Andrew at 10:15 PM