With the completion of my trek through the Dolomites I caught a series of buses and trains, arriving in Milan late at night. After a good nights rest I boarded a bus that took me to the airport. It was time to say ciao to Italy and hola to Spain. Here I spent three days with my sister and her family. I was touched to learn that one of my nephews made sure that my room was neat and tidy for my arrival, going as far to write a sign telling his younger brother not to mess up the bed. 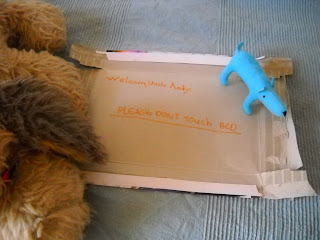 After eight days of demanding hiking it was nice to rest, play in the neighborhood pool and goof off with my nephews. Tanya and I also took the commuter rail into downtown Madrid and visited the the Museo Sorolla. This was the home of the painter Joaquin Sorolla and housing many of his paintings. I was impressed by how well he incorporated light in his landscape and beach paintings. The museum did a nice job showing the different phases of his paintings and had a wonderful garden outside. 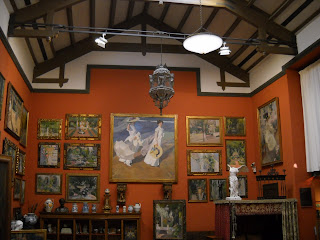 Tanya also introduced me to the Parque Europa. This is a park across the street from her home that has replicas of many famous European landmarks. In one afternoon I was able to crane my neck looking up the Eiffel Tower, pass through the Brandenburg Gate and cross London's Tower Bridge. 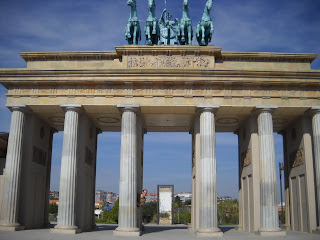 For my final full day in Spain we had a road trip, braving the heat we checked out the ruins of a castle at Zorita de Canes. Before storming the castle I helped my nephews find crawdads at the picnic area. It is very refreshing to see two young boys so excited about the birds and animals in the natural world. 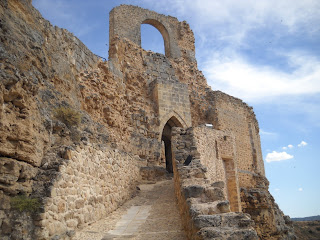 The plunder from storming the castle was cupcakes, mostly to celebrate the birthday of my nephew. The chance to be present so close to his birthday was a gift to me, rarely do I have that chance. 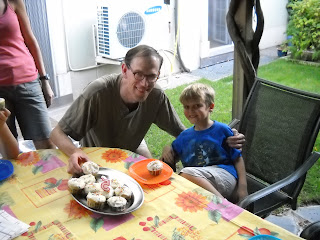 After the cupcakes were digested and the gifts were opened it was time to rest. For the next morning I returned to the airport, checked in my backpack and started back home.
Posted by Andrew at 4:52 PM No comments:

Having successfully made it to Ortisei I was ready to begin my journey into the Dolomites. I boarded a two stage cable car that whisked me up to the Secada at an elevation of 2500 meters. From here I headed East.

One of the major draws of hiking in this area was the propsect of spending the nights in high alpine huts, known as rifugios in Italian. Here one could enjoy a beer after a day of hiking, eat a delicious and filling meal and then spend the night without having to leave the alpine environment. All of this was possible without having to carry a sleeping bag, cooking gear and a tent. Before I left I had called ahead and made reservations as I was hiking on the tail end of the high season. Having spent the night in six huts I discovered that each one its own flavor.

I spent my first night in Rufugio Puez. Situated in a tiny little gulley Puez offered good views of the Stella group to the South. The word that best described this hut in my mind is compact. Able to accommodate 94 people, the bunks were three levels high. The low ceilings and archways in the dining area gave the interior a cozy feeling. I spent the afternoon and evening hanging out with a nice couple of Bonn playing cards. 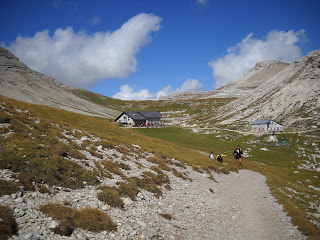 I did not spend my second night at a Rifugio, rather my path dropped down into the resort town of La Villa. Here I spent the night in a pension with a room big enough to dance. Knowing that I had a long day ahead of me I cleaned up and rested. From my porch I had a picturesque view of green pastures and the high peaks. 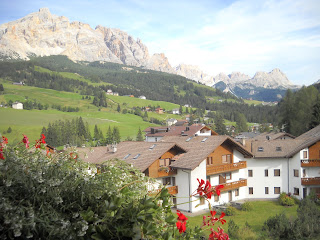 My next destination was Rifugio Lavarella. Here I was glad that I had made a reservation as this hut was full and turning people away. Located in a flat basin near a pleasant green lake, this hut was modern and positively luxurious. Like uez dinner was ala carte, but unlike my last rifugio I was assigned to a table by myself for dinner. 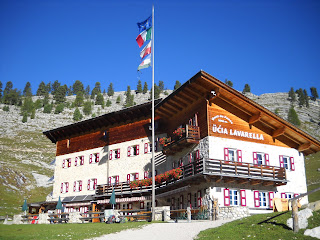 Located in a unforgettable lunar environment the Rifugio Biella had a more remote, undeveloped feeling. From my bunk room I had an incredible view of the alpine scenery. Downstairs in the dining area I was seated at a table with others. This, along with the smaller dining area, felt more interactive to me which made the evening very pleasant. Biella is located at the base of mountain Croda del Becco, which was well worth the effort to ascend. 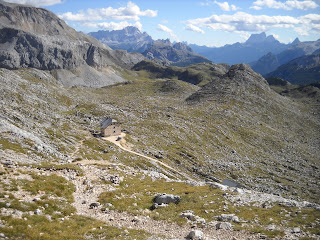 After day five I rested my head at Rifugio Vallandro. This hut is at the Southeast end of the wide meadows of Prato Piazza. This hut had a nice wood paneled dining area, comfortable bunks and a little history. It is situated right next to the ruins of an Austrian fort from World War One. From this hut we got up with sunrise and were treated to vivid red colors on the face of the Croda Rossa. 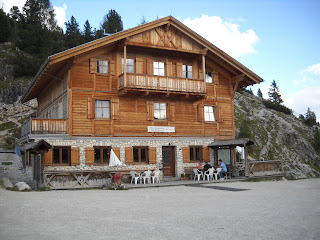 The travel itinerary that I was following suggested spending the next night at Hotel Tre Cime, but we pushed on further to Rifugio Locatelli. What this hut lacked in ambiance it made up in location. It offers an amazming vantage point to appreciate the Tri Cime Lavredo, three distintive peaks that used to be on the border between Italy and the Austrian-Hungarian Empire. I had a delightful dinner here, especially since a couple of Corvallis, Oregon were seated right next to me. 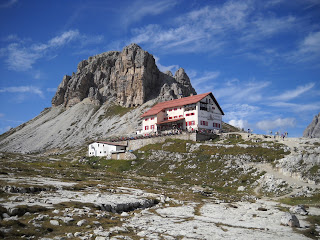 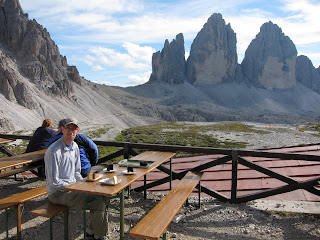 Little did I know that the best rifugio would be saved for last. I spent my final night at the Rifugio Pian di Cengia. Located near the impressive Croda dei Toni peak, this tiny little hut is the highest hut in the Tre Cime Natural Park. After eating my Weiner Schnitzel in the intimate dining area I climbed up a ladder and through a trapdoor to access the 15 bunk dorm. 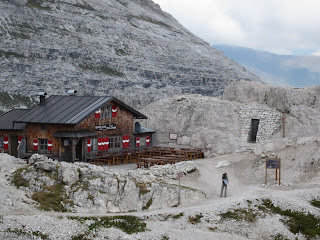 From here I descended for the last time ending up at Hotel Dolomitenhof. There I only had to wait 3 minutes before I boarded the bus that would take me to Sesto. From there a series of trains would take me to Milano for the beginning of the final chapter of my journey.

You can find more of my photos here.
Posted by Andrew at 8:39 PM No comments:

It was 10:00 pm when I finally arrived at my hotel room. Today's journey started by stepping outside the door of the Pian de Cengian mountain hut at an elevation of 2528 meters and ended a couple of blocks from the Milan Central Train station. I had teetered on the brink of utter exhaustion yet felt the satisfaction of fulfilling my dream of hiking from hut to hut in the Italian Dolomite mountains.

The seeds of this dream were planted decades ago when our family went hiking the White Mountains of New Hampshire. We spent the nights in an alpine environment, but left our tents and stoves at home thanks tot he lodges operated by the Appalachian Mountain Club. Years later I was at a Mazama slide show when I learned that I could the same thing in the network of Rufugios in the Dolomites of Northern Italy.

I believe life is too short to put off the things that really matter. Having just hit a milestone in my life, I knew the time had come to book my flights and pack my bags. Melissa Jaffee brought to my attention a route that ran from West to East in the Northern half of the mountain range. It was called the Dolomite Rollercoaster, so hold on tight. 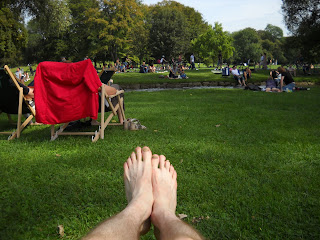 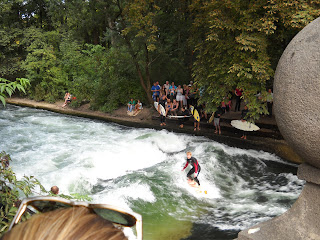 It seemed fitting that I would start this trek in Munchen as every time I have crossed the Atlantic I have ended up here. I was disappointed to discover that the Lenbacher Haus was closed and its Blauer Ritter collection was on a world tour. I did find deep satisfaction going to the English Garden, dipping my toes in the Schwabing Bach and enjoying the sunny weather.


After watching the surfers Hang Ten in the English Garden I caught a late afternoon train to Italy. When I arrived in Bolzano it was overcast with occasional drizzle. My plan was to spend two nights here, rest and get situated before starting my trek into the Dolomites. My stay here was almost extended due to a bus strike protesting proposed government cut. Luckly I caught a bus got out of town just 30 mintues before the strike started. The skies were still over cast, but I could tell the clouds were slowly lifting. 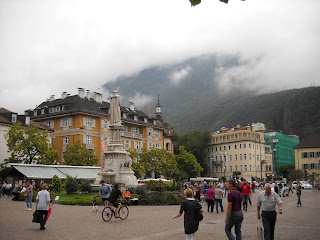 Next thing I knew I was Ortisei at the Seceda Ski Lift, ready to embark on my trek...... 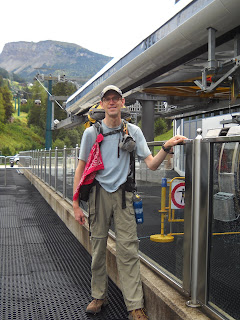