It was one year today that I climbed Mt. Hood for the first time.  It was a balmy night with very little wind.  As we ascended up the Palmer snow field the mountain glowed from the light of a full moon.  It was a magical experience with the added bonus of reaching the summit and safely returning to tell the tale.  Now, exactly one year later, I found myself on an another Mazamas climb up the South Side of Mt. Hood.  The question in my mind was how would it compare to my experience last year. 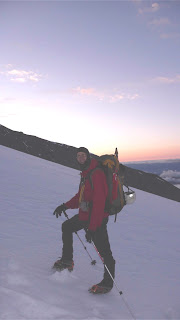 Mazamas Climb Leader Dan Schuster invited me to assist with this climb.  It was his basic climbing class group that I had worked with this spring.  I welcomed the opportunity to climb with those people, so I accepted.  While I have been the Assistant Climb Leader on a handful of climbs, I have yet to do one where we would rope up. 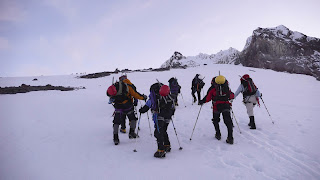 The weather report was iffy, so we started at 2am to avoid the showers that were predicted for Saturday night.  When we departed the Timberline parking lot there was a slight wind with cloud patches.  As we ascended the Palmer snow field the sky opened up, studded with stars.  At one point we could see a sliver of the moon to the east.  As the light of day overtook the night, we could see that we were climbing above the clouds.  We could also see climbers lined up, waiting to ascend the final 1000 feet.   As we were approaching the Devil's Kitchen one member of our party started to complain of nausea and dizziness.  At first I thought she was suffering from Acute Mountain Sickness, but it turned out to be a case of Vertigo.  Since we could not spare anyone to descend with her, the call was made for the group to descend.  At that point I led the group down.  There was a chute for glissading, but I felt it was too icy and steep.  Once we reached the level of the Palmer Ski Lift the snow was softer, so we removed our crampons as enjoyed the glissade down part of the way. 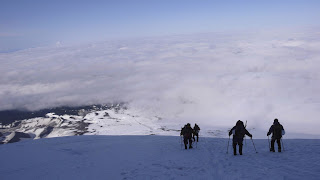 Not only was it was a glorious day, but I got some insights into what climb leaders consider when facing tough calls.  Before this climb started I thought my education as a Assistant Climb Leader would take place as I led the group down from the summit ridge.  Instead the most valuable lesson of day took place 1000 feet lower in the Devil's Kitchen.
Thanks to Jared Townsley for the photos.
Posted by Andrew at 9:01 PM