Although I am well beyond my trick or treating days, I celebrated Halloween this year at a variety of venues this year. It started last weekend when Deborah and I checked out the Field of Screams on Sauvie Island. We thought this haunted corn field was more effective than a haunted house. It seemed that the thick corn stalks gave the various monsters better hiding places than the restrictive walls found in a building. 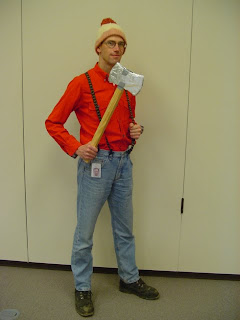 On Friday I left my tie at home and at work as I dressed up as a Lumberjack. I could not help to whistle the tune to Monty Python's Lumberjack song as I shouldered my axe. In my mind's eye I imagined myself leaping from tree to tree as they floated down the mighty rivers of British Columbia.

On Halloween itself we toured the Lone Fir Cemetery in Southeast Portland. As we were led around the cemetery we 'met' several of the inhabitants of this graveyard, who shared with us their stories. This included a woman caught up in a love triangle/double-murder suicide, a business man who shanghaied his own son and a prostitute whose gravestone was paid for by her clients. My neighbor Michael, who helped organize the event, later told me that 2400 people took this tour that evening.

To top it off we watched the film Shaun of the Dead, which was quite amusing. If zombies invade my hometown, I hope I would not be as oblivious to them as the movie's hero. I will confess that I covered my eyes during the really gory part.
Posted by Andrew at 7:42 PM No comments:

Day Hiking in the Olympic Peninsula

Most Wednesday evenings October to April the Mazamas presents Evening Travel Programs, which are open to the public. These are usually presentations along hiking, climbing, and travel themes. From time to time I've found they are a good way to spend an rainy Wednesday evening. 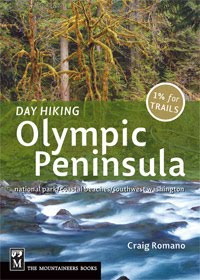 This evening Craig Romano was plugging his book Day Hiking Washington's Olympic Peninsula. While it was nostalgic to see slides of familiar places such as Wagonwheel Lake, Shi Shi Beach, and Ozette Lake, I appreciated the chance to learn about lesser know places. Going to this lecture broadened my knowledge of the South Flank of the Olympic Mountains. Also, my friend Scott would have been pleased that the author had photo slides of the Piper's Bellflower, which is endemic to the Olympic Peninsula.

The author defines the Olympic Peninsula as everything from the Strait of Juan de Fuca to the Columbia River. So he also presented a handful of lesser know hikes in Washington State Parks at Long Beach and Ocean Shores.

I asked the author if he thought the National Forest Service would reopen the road along the Dosewallips River. His perception was that the Forest Service wanted to do so and would start once they had cleared any legal challenges.
Posted by Andrew at 8:51 AM No comments:

My brother Scott was in Portland for a business trip the past week. At the end of the week we took a trip to Central Oregon, which turned out to be a good diversion from rainy Willamette Valley weather. 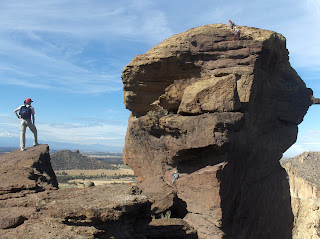 We covered a lot of territory on this trip. We hiked up Misery Ridge at Smith Rock State Park and watched climbers on Monkey Face. In Bend we caught up with Jen Floyd, who we worked with at Camp Parsons. We also checked out Cline Falls State Park, home of an unsolved attempted axe murder. On the way home we stopped at Silver Falls State Park to relive some childhood memories.

The big surprise of the trip was the hike along Tumalo Creek. I had heard about this area, but it was my first visit there. Tumalo Falls is located within tripping distance from the parking lot, but this is one of those hikes where continuing down the trail is well worth the extra effort. 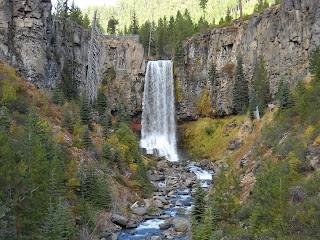 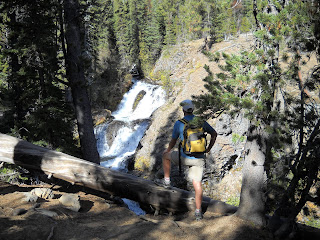 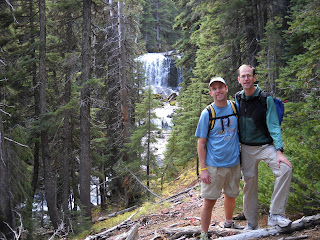 Upper Tumalo Falls
Posted by Andrew at 4:06 PM No comments: 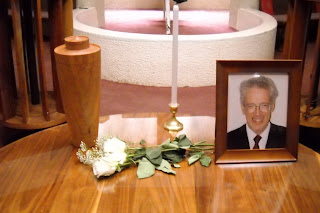 This weekend I traveled to Springfield, VA for the memorial service for Bob Marx, my father's cousin. Even though his family lived on the East coast, we saw him a handful of times during my youth. I always liked seeing cousin Bob. His easy going demeanor had an encouraging and supportive tone.
I knew that he had a long career at the Census Bureau, but until today I did not know the extent of his professional contribution. He was the architect of the Census Bureau's TIGER Format, which was used to improve the Census Bureau's process of taking the Decennial Census. In fact, Bob was the one who coined the acronym TIGER, which stands for Topologically Integrated Geographic Encoding and Referencing. If you are interested about TIGER, you can read more about it here on Wikipedia.
But this gathering was about much more than Bob's professional achievements. His 4 year old grandson got up in front of the audience to say how he wished that his grandfather would return to to play in his sandbox. I doubt at that moment there was a dry eye in the sanctuary. For me, I grieved that my father had lost his surrogate brother and childhood friend. The occasion also provided the opportunity to reacquaint myself with the Marx side of our family. I also got to meet many relatives that I had never met before.
Posted by Andrew at 7:54 PM 1 comment: