Friday evening I dined at the McMenamins Market Street Pub.  It is your typical McMenamins pub with a long copper bar and plenty of large booths.  This locale is located near the Portland State University campus and home to many memories for me.  Often I would be found here Monday evenings participating with the German conversation group Stammtisch that met here.  Within the walls of this pub I have experienced the highs of celebrating my birthday to the lows of being stood up.  I am pleased to report that I have a good experience this time  with very pleasant company and yummy tater tots.
Posted by Andrew at 7:57 PM No comments: 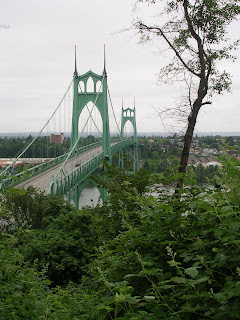 After a difficult day at work, I was looking forward to leading an Adventurous Young Mazamas Ramble this evening.  However, no one showed up, so made the best of the situation and took my own ramble at my own pace.  I started out at the Safeway in the Saint Johns neighborhood.  I crossed over the Saint Johns Bridge to a stairway that permitted passage to the Ridge Trail of Portland's Forest Park.  As I left the traffic of Highway 30 behind me I entered the sanctuary of trees.  I was surrounded by the lush, thick green foliage.  I could hear the pitter patter of the raindrops on the leaves.  After 750 feet of elevation gain I found myself at the Wildwood Trail, which runs approximately 30 miles through Forest Park.  As I headed north on the Wildwood the trail started to get muddy.  I was glad that I had worn my hiking boots.  The mud got thicker as I descended on the Hardesty Trail.  I find it fitting to lead Mazamas groups on this trail, since it is named after William Hardesty, who started the weekly hiking program in the Mazamas.  From the Hardesty Trail I took Lief Eriksen Drive back to the Ridge Trail.  I emerged from Forest Park happy that I had the opportunity for exercise and solitude.
Posted by Andrew at 9:18 PM No comments: 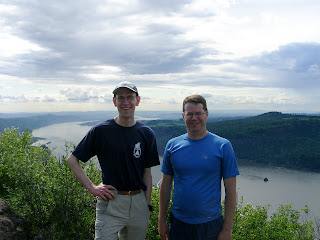 For years since I have been dropping hints to my scouting friend Scott that he is welcome to visit me here in Stumptown.  This weekend he and his girlfriend Christine were in town and they paid me a visit.  We were not content to just sit around, instead we drove out to the Columbia River Gorge for a hike to Angels Rest.  Not only was the weather stellar, but there was abundant Larkspur blooming on both sides of the trail.  Up on the top of this massive outcroping we snagged the bench and soaked in the magnificent views, without the gusts of wind that often plague the gorge.  During our descent I was very pleased to cross paths with several of my Mazamas friends.  They were on their way up to have a potluck dinner. 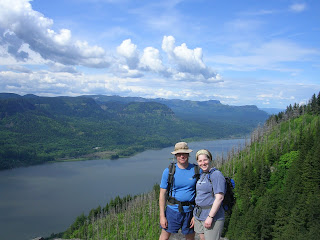 Back in Portland, we cleaned up and then headed to the McMenimans Ringlers Pub to meet some of Scott and Christine's friends.  It was surprisingly sparse inside this one time automotive service garage - perhaps everyone was outside because of the nice weather.  This is one of the McMenimans were smoking is allowed.  Thankfully the low number of patrons spared my clothes of reeking of second hand smoke.  As I worked on my Black Bean Burrito the weather took a turn for the worse.  Thunder and lightning were crashing through the air and the rain was falling hard.  It was a wet dash for the car.
Posted by Andrew at 11:32 AM 1 comment:

When I took the Mazamas Intermediate Climb School (ICS) in 2004 / 2005, we had only one trip to Smith Rock State Park.  Since then they have vastly improved the class by making two trips trips to this rock climbing Mecca in Central Oregon.  This weekend I returned to Smith Rocks for the second time this year to help out.
Saturday started with an early morning departure from Portland and passing over the Cascades along the shoulder of Mt. Hood.  As I drove south on Highways 26 and 97 I saw a grand view of the snow covered volcanoes of the Oregon Cascades:  Broken Top, the Three Sisters, Mt. Washington, Three Finger Jack, Mt. Jefferson, and Mt. Hood.  Most of the peaks triggered memories of my past travels, along with plans for the future. 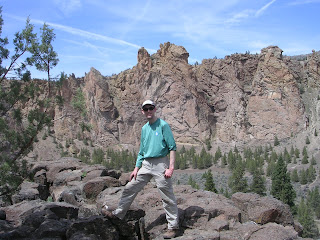 Most of the students were paired with graduates of the Mazamas Advanced Rock class to try out multi-pitch climbs.  Since I have not taken that class, I spent both Saturday and Sunday working with students in a top-roping situation.  At the top of the climbing route we would work with the students as they practiced building an anchor for each climbing route.  Then we would scramble down to the bottom of the route.  From there we spent the day taking turns climbing and belaying from the bottom of the route.  Both days I was stationed at North Point climbing area, which thankfully was in the shade most of the day.  Even with the shade it was hot, so Saturday evening I went for a cool dip in the Deschutes River near Steelhead Falls.
Initially it did not seem like there would be any climb leaders available to give me my final Field Session Evaluation that I needed for Climb Leader Development.  However, the coordinator may be able to provide one for me based upon my work this weekend.  Whether or not that happens, I left Smith Rock satisfied that I had helped provide valuable instruction and improved my climbing skills.
Posted by Andrew at 8:38 PM No comments: 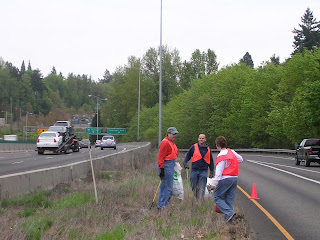 My friend from work Mark invited me to a trash pickup in the Hillsdale neighborhood in Southwest Portland.  It was organized by SOLV, which I learned stands for Save Oregon from Litter and Vandalism.  The weather was overcast but cooperative.  We spent the morning picking up trash along the Multinomah Boulevard on/off ramps to Interstate 5.  In addition to countless latte/coffee cup tops, I found two bicycle wheels and a Pennsylvania Drivers License.  At one point Mark and I were under a overpass that had severed as shelter for a homeless person.  It was sad to see several empty tequila bottles discarded on the ground.  As we picked up the litter some drivers honked to show support, while others left me with the impression that they saw us as an obstacle to get to their destination.  Mark, who had grown up in New Jersey, told me that he thought Portland was so much cleaner than his home town. 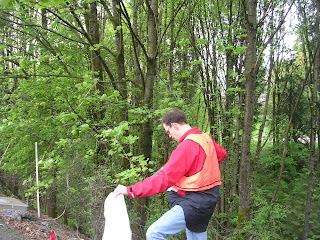 Posted by Andrew at 9:01 PM No comments:

I've added a widget that will allow you to subscribe to my blog.  As I post to the blog, the content will be emailed directly to the address that you enter.  You can find the widget on the right.
Posted by Andrew at 8:31 PM No comments:

Oh Brother Where Art Thou?

This past weekend I joined climb leader Paul Steger with an attempt to climb the South Peak of the Brothers, located between the Hamma Hamma and Duckabush Rivers in the Olympic Mountains.  It was a difficult undertaking for the first climb of the year because it was a multi-day backpack, it has been a heavy snow year, and it was unexplored area for our climb team.
We started on familiar ground by hiking up to Lower Lena Lake.  From there we followed the trail through the Valley of the Silent Men.  It was not long until we ran into serious snow and donned our snowshoes.  Things got really interesting we crossed a bridge with a tree that had fallen down over one end.  Here we had to hold onto a (thankfully) strong limb and swing around with full backpacks and snowshoes.  We shared camp at Lena Forks with another group of 12 climbers from Seattle. 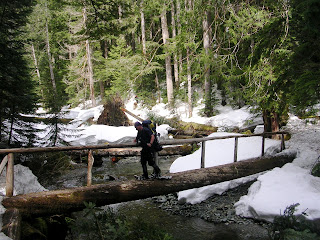 While it had been overcast when we went to bed, the sky was clear when we got up for our alpine start.  The other group had told us they had climbed this route before and we were welcome to tag along.  However, after snowshoeing up to a covered meadow at 4400 feet, we discovered that there was disagreement within the other group on the route.  This should have been a clue to us that they were not dialed into the correct route. 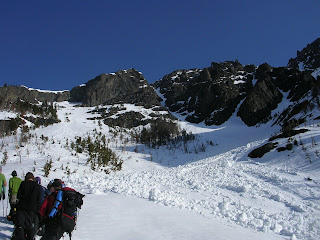 The two groups started to proceed up towards a headwall.  As the slope got steeper we shed our snowshoes and took turns kicking steps.  At the headwall the Mazamas stopped while the other group continued up the steep snowfield.  After we put on our helmets and pulled out our ice axes we started up the steep slope to 6000 feet, only to find that the other group had run into a dead end.  At this point I was asked to lead the group safely back to the headwall, where we rested and looked at our options.  We prudently decided that we needed to head back to our camp and our cars. 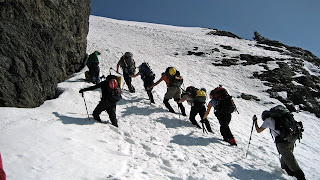 While this may had been disappointing. it was not.  It was a beautiful day to be out on the mountain.  Looking east we could see that the Puget Sound basin was clouded over.  Furthermore, as the Assistant Climb Leader I got practice leading the group down a sleep snow slope and navigating from the camp back to Lower Lena Lake.  Not only did I learn several little nuggets of climbing wisdom along the way, I have one of the three climbs as a Assistant Climb Leader done for Climb Leadership Development. 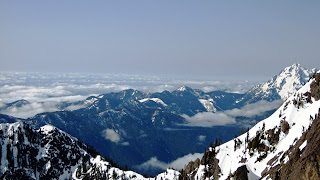 Posted by Andrew at 8:52 PM No comments: