It is Pedalpalooza time here in Portland, which means two weeks of a variety of bikey fun. Saturday evening I got in touch with my inner geek and took part in the Star War vs. Star Trek Ride. Costumes ranged all over the Star Trek/Star Wars universe, from Captain Kirk's green skinned love interest to Darth Vader. 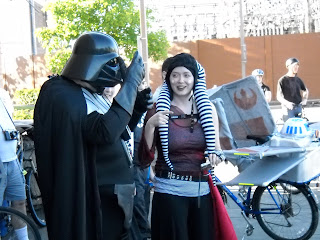 One of the most popular character was Princess Leia, with multiple variations of Carrie Fisher's character present. 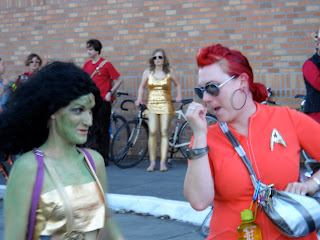 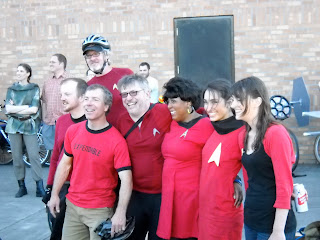 Interestingly enough, Jar-Jar Brinks and Jabba the Hut did not make an appearance for this bike ride.

I kept my costume simple by attaching two Tie Fighter wings to my bicycle helmet. I was a little nervous about the wind blowing my wings off, but even as we encountered light wind crossing the Burnside Bridge my costume stayed intact. 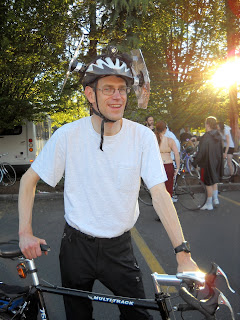 The atmosphere was festive as we assembled and then biked around town. A couple of people had sound systems rigged up that and were playing music from both Star Trek and Star Wars. As we biked through town people cheered. With the warm weather it was a stellar evening, so much excitement and celebration. Stops included Movie Madness and the Hawthorne Food Carts. The ride ended at Portland Rock Gym to watch the showing of Pee-wee's Big Adventure. 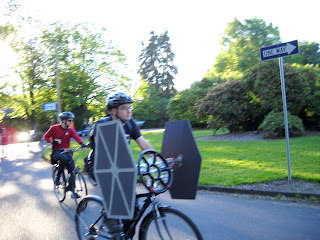 In addition to my photos, photos are posted at the Tiny Heros and Just One New Thing blogs. Noteterminal had some good photos on his photostream as well. And be sure to check out the video on YouTube, you might recognize yours truly pushing his bike around.
Posted by Andrew at 9:05 PM No comments:

A Tribute to Monty Smith

It was a late Saturday night in June 2002 when I arrived at the Pole Creek Trailhead near Sisters, Oregon. Our team of Mazamas were going to spend the night at the trailhead and then get an early alpine start to climb Middle Sister. Our car pulled into the trailhead just as another team of Mazamas had returned from their attempt to climb the mountain. They looked exhausted and worn down. I heard that they had a long day, just falling short of the summit when the Climb Leader made the call to turn around. I also learned that their Climb Leader was going to be the Assistant Climb Leader for our climb. We were warned that if he was too tired to climb early tomorrow, then our climb would be canceled.
That Climb Leader was Monty Smith and he was ready to climb with us the next day. Had I not been so new to Mazamas climbs I would known there was little doubt that Monty would have been able to join us. Monty had well earned reputation of being a strong and energetic climber. I did not have much of a chance to climb with Monty that day, because as we approached the Hayden Glacier my knee was bothering me and I needed to return to the trailhead. It was Monty that guided me over the snow back to the trail while the others continued onward. I was feeling lousy about potentially jeopardizing the climb, but there was nothing but positive chatter from Monty. As we covered the distance he competently used his compass to get me back to safe place. Once I was off the snow and on the trail he turned around, backtracked, and eventually caught up with the others. 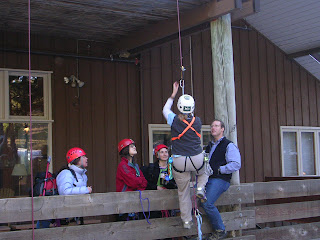 Two years later I was accepted into the Mazamas Intermediate Climbing School. I applied in part because Monty was the leader of that class. It was Monty that showed us the ropes, recruited others to teach us, shielded us from the wrath of the Mazama Lodge Managers, and encouraged us along. He eagerly shared his knowledge with us with that same positive demeanor that I got to know on the slopes of Middle Sister. 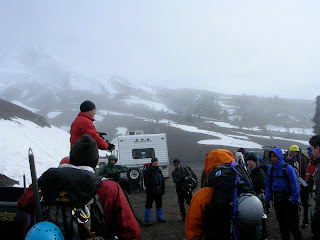 Monty giving out instructions before Crevasse Rescue practice, May 2005
Monty was not only a climber and teacher, but he was a life saver. The Mazama 2003 Annual described how Monty helped save a team of climbers on the Moench in the the Swiss Alps. In addition Monty was active with Portland Mountain Rescue. Searching online one can find multiple instances where the Monty was involved in rescues on Mount Hood.

So it was a shock to learn that we lost Monty on June 5th. It grieved me learn that he had been suffering. The last time I saw Monty was at a lecture he gave on mountain weather for a Mazama climbing class. As usual it was well done and informative, I walked away better prepared to make decisions about the weather. Not only have I lost one of my teachers, but we all have lost a highly regarded role model. My deepest condolences to his family.
Posted by Andrew at 8:55 PM No comments:

The parking lot at Gateway Transit Center was mobbed with hikers. After enduring a long spell of rain, it was not surprising to find so many people at this central gathering place of hiking groups. Today was going to be sunny to be followed by rain on Sunday. I could sense the deep frustration with the past weather and the excitement/desire to get out now while the weather was good.

There were two dozen hikers that wanted to go Hunchback Mountain with the Mazamas. Since this hike was in a Wilderness Area, our group had to be limited to 12 people. So I joined an unofficial splinter group that hiked independently from the official group. 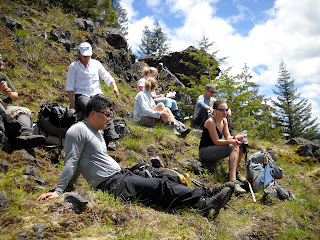 The trail starts out steep through the lush green undergrowth dominated by Oxalis and Sword Ferns. After the first two miles the trail levels out and most of it is along a forested ridge with a few openings that afforded viewpoints of the Salmon River Valley. There were a couple of times when I had the trees to myself and could absorb the (near) quietness of the forest. I also enjoyed how the trail varied from hiking along steep hillsides and narrow ridges. At the Great Pyramid, a narrow rock ridge that juts out above the Salmon River Valley, we escaped the red ants and found a sunny viewpoint to enjoy our lunch. 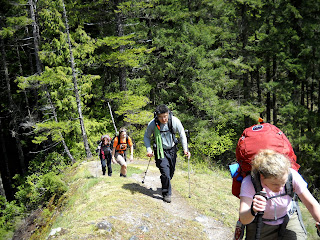 Posted by Andrew at 8:49 PM No comments: