What started out as a straightforward hike up Hunchback Mountain in Mt Hood National Forest ended up as a bushwhacking adventure.  Brett and I picked a great day to hike up this forested ridge crest trail.  I must admit, having gone on several hikes with the 'old but bold' crowd, it was an adjustment to hike with someone younger than me who had just returned from a marathon.  Anyway, we did not have the first viewpoint of the Salmon River Valley to ourselves.  Several of the Zigzag Hotshots were just descending from a hike, carrying their chainsaws and shovels.  There was also a large group of Mazamas taking a break, some of whom I recognized.  After enjoying the view of this evergreen covered valley we continued on to the Great Pyramid where we paused for lunch. 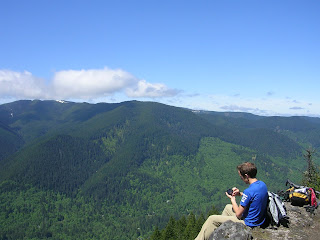 We decided to make a loop by continuing on to the Green Canyon Way trail, descending to the Salmon River, and hiking along the River by trail and road.  As we descended from the Great Pyramid we started to encounter larger snow patches and more downfallen trees.  Looking back, I think the two of us did a great job of reading the map and finding the Green Canyon Way Trail.  It was clear if we descended west from the ridge we would eventually end up at the Salmon River.  The trick was to find the general path of the trail.  In retrospect I think we veered north too early and allowed ourselves to get sucked into a creek valley.  In this case, the path less travelled was very picturesque.  There were several cascading waterfalls and the moss covered banks of this creek were indeed a pleasant sight.  Fortunately we were able to descend the steep hillsides and navigate around the drop-offs.  Brett had taken a GPS waypoint where we left the Hunchback Mountain trail, so I felt good that we could get back if we had run into a dead end.  However, the slopes leveled out and we slowly bushwhacked along the creek.  It was hard work, so the Salmon River trail was a very welcome sight.
After the river trail ended we started walking down the road towards the trailhead.  We were very grateful to the couple that gave us a lift back to the car.  Our adventure hardy was not over when we reached the car.  In the parking lot a USFS law enforcement officer was talking via cellphone with a hiker who was lost on Hunchback Mountain.  We pulled out our maps and helped the officer determine the approximate location of the hiker.  This story also had a happy ending and you can read about it in the Seattle Times and Oregonian.
Once again my appreciation grew for the various organizations that help maintain the trails.  I would strongly suggest that you check out the Washington Trails Association and Mazamas Trail Tending.
Posted by Andrew at 10:02 PM