Pedalpalooza and other adventures 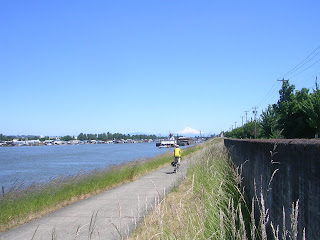 I have been spending a lot of time on my bike this week.  Wednesday I biked to the Kennedy School in Northeast Portland.  If you could visit only one McMenamins joint, this would be the one.  Built in 1915 , this building was a elementary school until it closed its doors after the 1974-1975 school year.  22 years later it re-opended as part of the McMenamins universe.  Here I have watched second run movies in the Theater Pub, relaxed in the hot soaking pool, square danced in the gym, and dined with friends, family, and co-workers.  What I love about this place is walking down the halls and enjoying the artwork, savoring the nostalgia of my time as a elementary school student.  The occasion tonight was to meet with Dan and go over the Basic Climb class evaluation that he had written for my Climb Leader Development.  I certainly appreciated the insights and knowledge that he has given me.  I consider myself fortunate to have had great mentors in the Mazamas.
Thursday evening I biked further from home, this time to the Hawthorne District in Southeast Portland.  Here was the graduation party for the Intermediate Climbing School that I had helped out with the last nine months.  I was quite pleased to see that so many people had biked to this event.  Not wanting to bike such a long way home, I put my bike on a Trimet bus that brought me within a mile of home.
The next evening I set out to do something that was not Mazamas related.  I pointed the front tire of my bike towards the Alberta Street area to take part in a Vegan Cyclist Pub Crawl.  This was part of Pedalpalooza, which is two weeks of bikey fun with events ranging from bike rides to bike jousting.  Tonight's plan was to visit a variety of vegan friendly pubs.  This is in conjunction with PDX Try Vegan Week.   While I am not vegan, nor am I a vegetarian, this looked like fun.  And it was. The toughest part was arriving at the Bye and Bye Pub and finding the Pedalpalooza crowd.  One I did I settled into conversation until it was boldly announced that the Vegan Pub Crawl would be moving on.  Next thing we had 30 + cyclists steaming down Alberta Street to our next destination, the Mash Tun Pub.  After some pool and a wonderful Porter, we headed south through the Irvington neighborhood to the Hungary Tiger Too.  There was one more pub on the agenda, but it was time for me to head home.  You can read a recap of the Vegan Cyclist Pub Crawl here.  Stay tuned for more Pedalpalooza reports, since there are a couple of other events that I plan on attending. 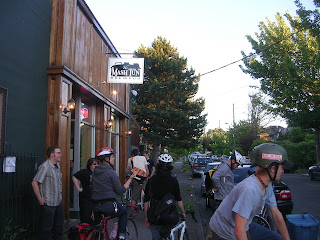