As part of the Mazamas Advanced Rock class, I have been taking a lead climbing clinic at Club Sport's rock gym.  For our second clinic, we had a mock fall.  Each of us would take turns lead climbing partway up the wall and then falling.  Our lead belayer would then arrest the fall with their belay device.  The belayer would be backed up by a top rope belayer.  The objective of the exercise was twofold as it would give the lead belayer practice in catching a fall and help the climber become more comfortable with falling.  As crazy as the latter point sounds, it actually is helpful as it builds trust the system.
I think I was more nervous about arresting a fall than falling.  When my climbing partner fell, it yanked me upward, but I was able to hold the belay and stop the fall.  When it was my turn to fall, it was tough to let go, but watching someone else do it gave me courage to do so.
For the third and final clinic there was more practice falling.  First we would take falls on a top rope.  As the belayer on this exercise, I was surprised how little effort was necessary to catch the climber's fall.  Then we shifted from a top rope to lead climbing.  This was quite exciting for me, since it was my first lead climb ever.  After one lead climb, we did a couple lead falls.  I once heard that courage is faith plus action.  That certainly described what it took to let go knowing that I would fall twice the distance between myself and the last bolt I had clipped into, plus whatever slack there was in the rope.  But I exhaled, let out a whoop, and raised my arms up.  Sure enough, my belayer caught me.  The systems works!
Posted by Andrew at 9:49 PM No comments:

No, the title is not NOT referring to the AC/DC song.  When I told my friend Eileen that I was in Advanced Rock, she told me to sink the pink.  I was puzzled by the comment, but I think I get it now.  She was referring to the Size 0.5 Tricam from Camp, which has a pink sling.  This is the only rock protection piece that I know of that has inspired a poem, Charles Danforth's Ode to a Pink Tricam.

I have brought this up because the Pink Tricam played a big role for me this weekend.  I have been getting a taste of lead climbing this week.    Thursday I started a Lead Climbing clinic at the Club Sport rock gym as part of the Advanced Rock class.  We didn't do any climbing, but we practiced on a fundamentals such properly clipping in (important) and lead belaying.  Then on Saturday we had a field session where we did some simulated lead climbing.  Our task was to climb halfway up the vertical wall at Rocky Butte and build a multi-directional anchor.  Using this anchor we would rappel back down.  The climber would be backup by a belay through the top rope anchor that we built up above.  While we climbed up we would periodically place rock protection.  Climbing up rock is hard work, I discovered that placing protection is even harder.  The first time I was attempting to do so I was struggling, but my belayer encourage me to hang in there.  I saw a horizontal crack so pulled out my pink Tricamp, slipped it in snug, and clipped in.  Success!
Posted by Andrew at 3:05 PM No comments:

I am faced with a bit of a challenge this Spring.  The past four years I have used the conditioning hikes that are part of the Mazama's Basic Climbing class (BCEP) to stay hiking trim for the Summer's climbs.  This year I am not helping out with BCEP so I can focus on the Advanced Rock class.  However, there is very little aerobic exercise in rock climbing, hardly enough to prepare me for my upcoming climbs.
So, with the glorious weather this weekend, I have attempted to kill two birds with one stone.  Sunday I drove out to the Columbia River Gorge and hiked most of the way up the Nesmith Point Trail.  Along the way I came across a Boy Scout troop, with the Scouts galloping down the trail.  They told me that their adult leadership would not let them hike up in the snow.  As I got towards the crest of the gorge I came across the snow.  There were good steps kicked in the snow, but I also would have thought it was too steep for Tommy Tenderfoot.  I picked a spot with a view of Beacon Rock and Mt. Hamilton and ate my lunch.
As I drove back to Portland I stopped at Lewis and Clark State Park and hiked up the crags of Broughton Bluff.  Saturday our Advanced Rock class had a field session focusing on building rock anchors.  So here I pulled out my gear and practiced placing rock protection and built a couple of anchors.  I am discovering the building an timely anchor is a big challenge, so this was an excellent opportunity to practice. 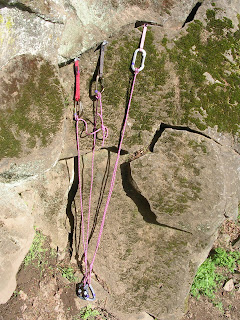 Check out this Equalette Anchor with three TriCams placed in a horizontal crack.
Posted by Andrew at 5:36 PM No comments: