I am going through bike withdrawal.  Looking at BikePortland.org I see there are those who have been biking through he streets of Stumptown, but that is beyond my comfort level.  So, my work commute has been a mixture of walking to work and taking the bus.  Actually, the one time I took the bus to work it broke down halfway there.  My supervisor was kind enough to drive out and rescue me.  Just about each day the last week one of my co-workers has asked me if I have rode my bike, as if they were checking to see if I had any common sense. 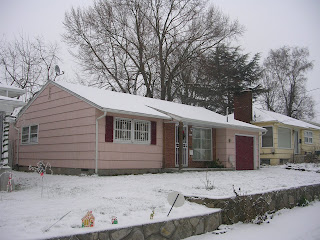 Finally we were spared the torture of the weather trying to decide whether to snow or rain.  The first photo was taken Saturday afternoon.  The second image was captured Sunday morning.  I had several events canceled or rescheduled this week, including the Sing Along Messiah, getting together with a friend for a beer, an AYM hike, and hosting some friends at my place after a Waltz dance lesson.  As disappointing as the the loss of those social opportunities, I was grateful for the cozy feeling of watching the snow flakes fall as I gazed out the window.  I keep reminding myself to count my blessings. 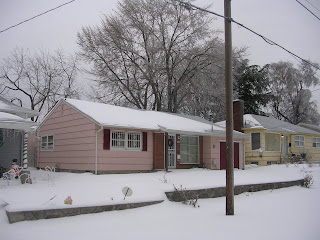 You may notice there is less snow on the roofs in the second photo, which is a sign of the winds that have been blowing here.
Posted by Andrew at 9:53 AM No comments:

Well, I thought I would be helping out with the Mazamas ICS Avalanche Beacon Practice up at Timberline, so I thought I would kill two birds with one stone.  I would start by helping out for this climbing class field session and then spend the evening at Scandinavian Dancing with Norske Runddansere.  They were having their annual Snow Ball at Mazama Lodge.  Then I found out that the Avalanche Beacon Practice was taking place in town, so I settled for a weekend up at the Lodge. 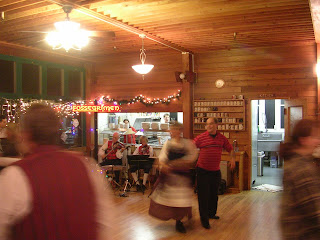 It was fun to dress up once again in my traditional Swedish Folk Costume - the second time this month!  Before the dancing started I got in touch with my creative side and helped decorate the Lodge.  Grog was served, which brought back memories of drinking Gluewein during the holidays in Germany.  The folks at Norske Runddansere are a good group to dance with, I got lots of friendly help with the various dances.  I am especially encouraged with my progress with the Hambo. 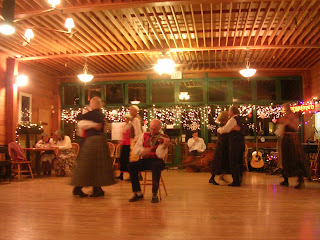 Posted by Andrew at 9:04 PM No comments:

My Swedish heritage got plenty to attention on this social whirlwind of a day.  It started when my parents arrived with my Swedish relatives Kurt and Anita.  I had visited them twice in Mora, Sweden - once in 1993 with my friend Eric and then in 1996.  It was great to host them here in Portland.  They were stopping for lunch while underway to visit some friends in Bend, Oregon.  We had a great time catching up and looking at the photos of my past visits to Sweden. 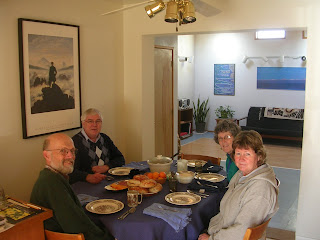 Then I drove to Northeast Portland for my Mazama friends Laura and Dan's housewarming party.  I had worn my Swedish Folk Costume because my next stop would be the ScanFair at Portland State University.  My costume turned out to be a great conversation starter and a great chance to share a part of my self with my friends.
My next stop was Portland State University for the Scandinavian Heritage Foundation's ScanFair Dance.  Here I got a chance to practice the Hambo, Waltz, and other dances. 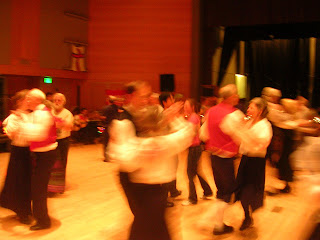 Posted by Andrew at 2:29 PM No comments:

I knew it was going to be close, but in the end things fell into place nicely.  The last field field session that I had to attend for Climb Leader Development was the same day that I was to fly to San Juan, Puerto Rico.  I had reserved a seat on a plane that was going to leave Portland Saturday evening, but the airline rescheduled it for 3pm.  Thankfully I arranged it so I could help out with the Navigation Field Session in the morning, return home and grab my bags, and take Airport MAX to the airport. 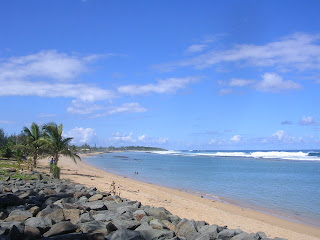 While Puerto Rico seems like an odd place to celebrate Thanksgiving, it was ideal in several regards.  For the Spanish contingent of the family there was a direct from Madrid to San Juan.  As a Licensed Customs Broker, I knew that Puerto Rico was with the US Customs Territory, meaning that I would not have to go through Customs.  Throw in sunny and warm weather and this Free Associated State of the United States looks like a good place for Turkey Day.
Our home base was in Loiza, which is about 30 minutes east of San Juan by car.  Driving there the first time I passed by sand beaches and hoards of people lining up at wooden shacks.  Smoke from wood burning fireplaces left a distinct smell in the air.  Signs advertised deep fried cod and coconut milk.  The roads were narrow and twisty.  Locals sat outside of bars and watched the traffic pass by.  I was impressed by the amount of public art that I saw in the town center.
Once everyone had arrived and the local beach and pool had been explored, we set out to wander in Old San Juan.  At this I had been adapting  well to the erratic style of driving, so I was enjoying being behind the wheel.  Old San Juan was colorful, with old city walls and a couple of fortresses to explore. 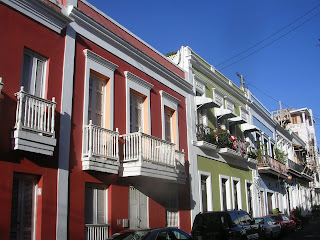 I enjoyed walking along the waterfront and soaking up the panoramic view.  We were even entertained by pelicans dive bombing into the water for fish.  The highlight was exploring the oldest Spanish fortress in the new world - El Moro.

I was not content to spend my vacation in just an urban environment.  This was my first exposure to a tropic environment, so I wanted to head for the hills.  Thankfully Lozia was near El Yunque National Forest, located in the Luquillo Mountains.  We started by taking in the view from Yokahu Tower and checking out La Coca Falls. 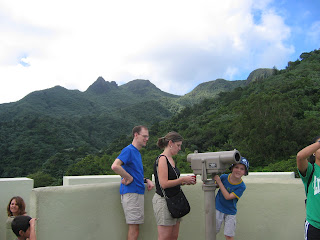 Then we set up a car shuttle (thanks Tanya and Miguel) and hiked to La Miina Falls, where Scott and I took a dip under the shower of the falls.  Then we hiked back to the road via the Big Tree Trail.  Next we drove up the road to the next trailhead, where we would hike up to the Mt. Britton Lookout Tower, with another panoramic view of the lush green hills and blue ocean.  El Yunque Peak just seemed so close, so we ventured onward to this highpoint.  Unlike the other paths, this one was not paved.  I was a little concerned about getting out of the park before the gate closed at 6pm, but we made it out with time to spare.  I did not want to get stranded here, since I was due to play Jenga with my nephew in the evening. 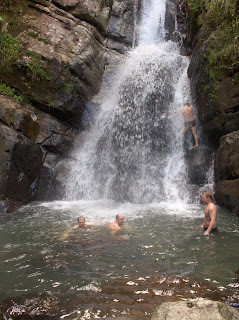 It may seem ambitious to put together a traditional Thanksgiving dinner when away from home, but we pulled it off.  Credit goes to my parents from bringing a bag to cook the turkey in, a sharp knife for carving the bird, sage for the stuffing, and a potato smasher so my brother could cook mashed potatoes.  Mum and I had to make a last minute run for more yams at a local fruit stand, as we discovered that food goes bad faster in a warmer environment.

The day after Thanksgiving we headed West to the Karst region of Puerto Rico.  Here we visited the National Astronomy and Ionosphere Center, just south of Arecibo.  This is home of the Arecibo Observatory, the largest single-dish observatory in the world.  This 305 meter radio telescope is cleverly built in a limestone sinkhole.  If it looks familiar, you may have seen it one of your school textbooks or the films Contact and Goldeneye.
Puerto Rico is home to three all season bioluminescent bays, so we signed up to take a Kayak tour of Laguna Grande, in the Northeast corner of the island.  It was a surreal experience to paddle up a narrow mangrove channel in the dark.  Along the way there were smells ranging from sweet jasmine to something that reminded me of sulfur.  The frogs were chanting 'coqui' deep in the underbrush.  The wake from the kayak glowed as we approached the bay.  As we paused I would dip my hand into the water and watch it blaze with color.  Amazing.
As my time in Puerto Rico came to an end I departed for Philadelphia, where I had a five hour layover.  I took advantage of the time and took the train into the Old Town.  It was a big adjustment to go from 80 degrees and sunny to 40 degrees and rainy.  Here I saw the Liberty Bell and toured Independence Hall.  I hurried back to the airport to find out that my flight had been delayed due to weather.  I was wondering if I would make it back to Portland in time to catch the last MAX train.  Luckily I was able to recover my luggage and dash onto the last train with the doors closing right behind me.
Posted by Andrew at 8:27 PM No comments: 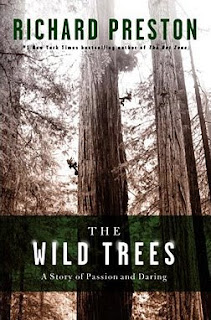 As I was preparing to lead the Adventurous Young Mazamas to the Redwoods National Park,  I came across Richard Preston's book Wild Trees.  This book is about some of the folks who would climb very tall trees, such as the Coastal Redwoods, for scientific research.  It appealed to my appreciation of trees and climbing, so I checked it out from the library.
On the surface this book follows the ups and downs of the principle characters.  The first is Steve Sillet, who is currently a professor at Humbolt State University.  The second is Michael Taylor, who explores the thick Redwood forests in search of the tallest Redwood that still stands.  He eventually found  the 391.1 foot Hyperion, which stands in an undisclosed location in Redwoods National Park.
What I found fascinating was to learn about all of the life that is found up in the forest canopy.  It was not surprising to learn about salamanders and lichens that live up there. But to read about Sillet free climbing a redwood and eating huckleberries was amazing.  It seems that over the years drifting soil collects in the tall trees, making it possible for ferns, Salal, and other trees to take root and thrive .  I have visited Redwoods National Park twice. In the depth of my awe for these grand trees it never occurred to me that there was a diverse eco-system high above me.  I think that is one of the important points of this book, that people like Sillet and Taylor are showing us there are still places in our backyard that have yet to be discovered.   95% of the Coastal Redwoods have been lost to logging, I pray that we're not too late.
I had to cancel the Redwoods trip due to a grim weather forecast.  This book certainly increased my resolve to return, for I can appreciate the diversity of life up in the tree canopy more.  While I feel the author sensationalized some matters, he certainly conveyed the drive behind these people who find meaning up in the forest canopy.
Posted by Andrew at 4:50 PM No comments: