Driving from Portland to Mount Rainier National Park was an act of faith Friday evening. My windshield wipers were often on full as the rain fell. The weather forecast called for party sunny skies on Saturday. Many times I have been driving to the trailhead in the rain, questioning my sanity, but betting that the weather would improve. I had also gambled that I would be able to find a campsite at Rainier's Cougar Rock campsite on the busy 4th of July weekend. As usual, things fell into place.

The occasion was a Mazamas climb of Unicorn Peak, which is found in Rainier National Park's Tatoosh Range. Unicorn Peak did not suffer the same fate as my Brothers or Hood climbs in that it was only rescheduled. The other two had been canceled outright due to lousy weather and unsafe avalanche conditions. That was last month, today I focused on assembling my team and seeing if Unicorn Peak would allow us safe passage.

Upon arrival at the trailhead there was a lone car with Oregon plates parked, turned out it was two friends from the Mazamas out on their own climb. As the day passed our two teams worked together on several occasions. It was a very satisfying part of the climb for me.
I had scheduled this climb because I thought it would be a great climb for beginners and I would have the chance to practice the skills that I learned last year from Advanced Rock. I also wanted to face the rappel again, as six years ago I took a pendulum swing there that gave me a good scare. 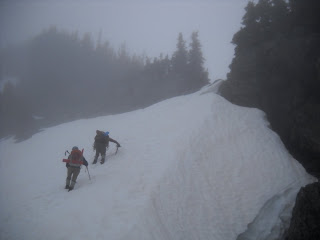 Approach the crux of the climb: the snow moat.

The weather was cooperative, although we were sopped in the clouds for two thirds of the climb. We made good progress past Snow Lake and up the first gully. Upon reaching the Unicorn Saddle we had to negotiate a snow moat as the bridge from the snow to the rock had melted out. Working with the other party we were able to find safe passage across. 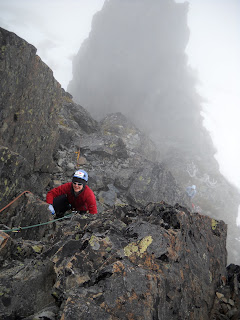 Climbing up the summit block.
At the summit block I placed a fixed line that the others tied into to protect them as they ascended. I was the last one to descend off of the summit pinnacle. I found it rewarding to return here and see how my climbing skills have improved over the years. 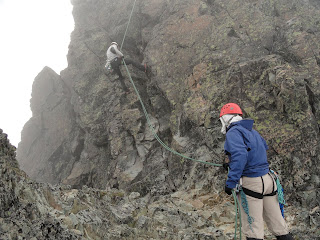 Rappel off of the summit block. This time I was ready for the pendulum. Photo by Andy Prahl.
As we descended the clouds opened up and we were treated to stellar views of Mount Rainier. 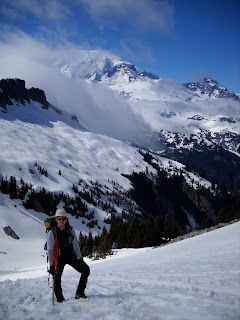 You can find some more photos at this link. For another perspective on this climb, check out another trip report from this climb here.
Posted by Andrew at 8:09 PM