It was 11:30 pm at the Alfy's pizza in Sedro Woolley, Washington. I was one of four people standing outside in the parking lot. We had barely made it here in time to order take out, so our discussion of the days events had to take place outdoors. Originally we had planned on spending the night at a higher elevation, but circumstances had changed our plans.
The plan was to hike into base camp at 6100 feet on Friday, cross the Sulphide Glacier and ascend via the Southeast Rib on Saturday, and hike out on Sunday after a night of rest. The venue was Mount Shuksan in the North Cascades National Park. Two years ago I had summited Mt Baker and looked down on this peak. I was so impressed that I resolved to return. 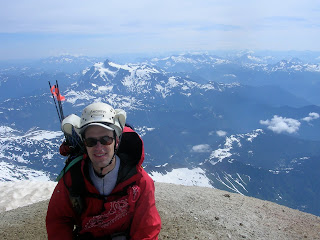 Mount Shuksan as seen from the summit of Mount Baker

The hike in was glorious, despite the bugs and downfallen trees. As we hiked along Shannon Ridge we marveled at the views of Mount Baker. It got even better once we passed through the pass at 5400 feet as more the grandeur of the North Cascades came into view. It was a shame that someone more familiar with the peaks of the area was not amongst us. 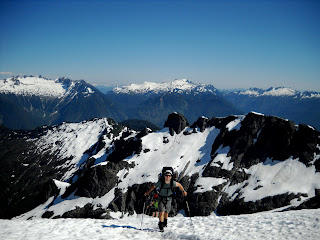 We pitched our tents on the snow at a elevation of 6100 feet. There was glacier melt trickling down, so we did not have to melt water. The setting was incredible, looking North was the summit pyramid and an impressive set of crevasses. In all other directions the mountain peaks seemed to go on forever. After a pre climb meeting and discussion about crevasse rescue we retired to our tents. 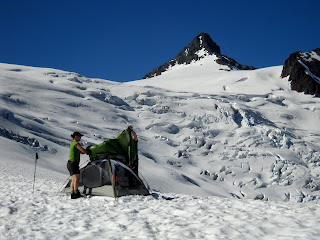 View of the summit pyramid from base camp

The weather seemed mild as we roped up in the morning. Staying on the west side of the glacier, we did not have to cross any major cresvasses. Instead of ascending the summit pyramid via the popular Central gully, we ascended by the Southeast Rib route. I had read that this route had better rock and less chance of party induced rockfall. As I lead up this route I was quite pleased to have the chance to put the skills that I had learned in last years Advanced Rock class to use. 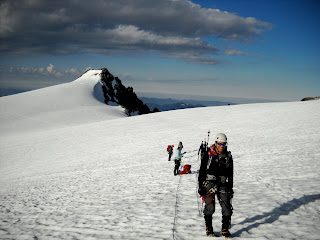 About 300 feet short of the summit I started to feel some light drizzle. While the others ascended by the rope that I had secured I scouted the route out a little. The rock was starting to get wet. At that point I decided that we needed to head down. I felt at peace with my decision. Then the others reported hearing a high resolution buzzing. One lady took off her helmet and her hair was standing straight up! The air was electrically charged, lightning was not far off. We quickly set up a rappel and descended down into the Central Gully. By the time we had roped up for glacier travel the clouds were moving in and we were hit by blowing rain.
Our descent down the glacier had been orderly, but we had been hammered by the wind and rain. Back at base camp we found that one of the tents had been blown away, only to be rescued by another climber. So much for our restful night at base camp. We packed up our wet gear for a long hike back to the trailhead. 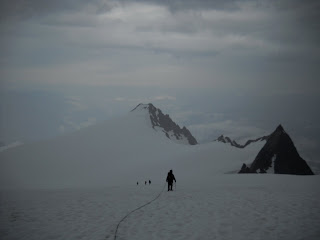 As I look back I cannot help to think of all of the blessings of this climb. One from our team really enjoyed learning about the nuts and bolts of glacier navigation. Others got to overcome a challenging portion of the rock climb. The weather had turned on us quickly. It is difficult to say whether there were signs that we could have recognized earlier. However we did heed the warnings and worked together as a team to safely return to the trailhead. This climb was a great learning opportunity for all.

You can find more photos of this climb at this link.
Posted by Andrew at 10:40 PM