For some time I have wanted to hike in the Trapper Creek Wilderness, which is located in the Southern Cascades and is part of Gifford Pinchot National Forest.  While I did trail maintenance in this area last year, I have not hiked up to Observation Peak.   So when the question of what to do with my day off on July 3rd came up, scheduling a hike there seemed like the natural answer.  As I planed the hike, I decided to follow the grand tour suggested by Paul Gerald's 60 Hikes Within 60 Miles of Portland.  With the three day weekend I figured I could dedicate the whole day this 13 mile loop along the Trapper Creek Trail, up to Observation Peak, and then returning via the Observation Trail. 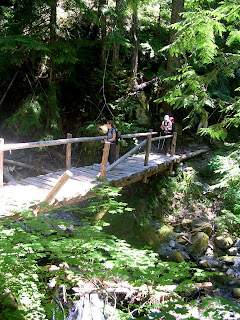 Most of this hike was under tree cover, which was ideal for a day where the temperature got into the 90s.  The first 4.5 miles did not have any serious elevation gain, but then it took off in a hurry.  And we were not following the trails that the author described as 'a butt-kicking good time' that the Mazamas built and maintained.  At one point we crossed over some patches of snow patches and then the mosquitoes came out in force.  I had smashed bugs smeared all over my legs and arms.  But then their numbers dwindled and we made the final push for Observation Peak.  Up there the Bear Grass was blooming and we had a stellar view of the forested valleys, the local volcanoes, and a couple of familiar high points in the Columbia Gorge. 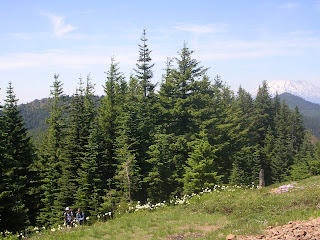 I really have to hand it to the four who signed up to join me.  This was a long, demanding hike on a hot day.  However we all worked hard and I am certain it was worth the effort.  One gal was preparing for an upcoming Mt. Adams climb.  It felt meaningful to me to help her towards that goal.  It also felt good to prepare myself for my upcoming climbs in addition to enjoying a great day in the outdoors.
Posted by Andrew at 8:01 PM