Some of you may recall that I climbed the first pitch of Super Slab on Smith Rock State Park's Red Wall in March 2008.  Well, on Sunday I returned to this route and lead all three pitches.  Thankfully it did not hale on me this time.  Near the top of the third pitch I was able to place my trusty pink Tricam in a little pocket hole, giving me the confidence to make the final effort to complete the route.
On Saturday our coordinator Ryan Christie took us up the Sky Chimney route.  Here I lead the first pitch, while Ryan led the final two as they were too difficult for me to lead.  This was the day that I realized that I climbed more confidently along cracks, as opposed to climb up just the face of the rock.  Sky Chimney has a long double rope rappel, a portion of which is overhung.  That had me rappelling though the air, slowly spinning in circles.  Here is how it started out... 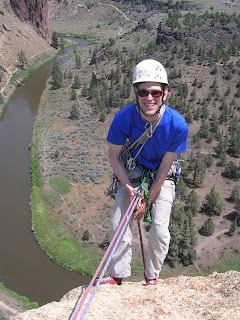 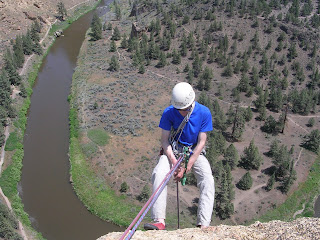 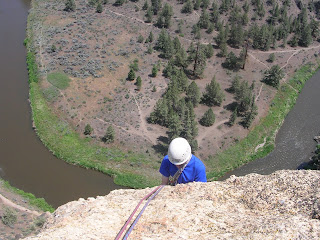 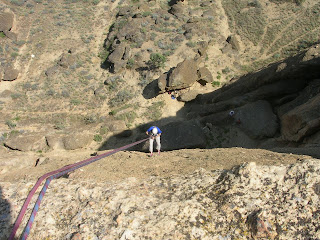 When I returned home I discovered that I was not the only one climbing.  One of my green bean vines had started to climbing up the trellis in my garden.
Posted by Andrew at 9:30 PM

Good for you, although those pictures reminded me very quickly why people afraid of heights (like myself) should not be climbing!