Moscow on the Crooked River 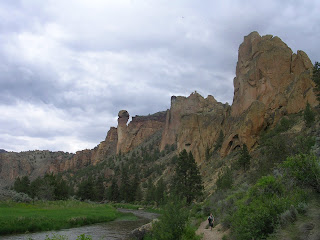 I was about to lead the third pitch of Spiderman, located on the west side of Smith Rock State Park.  This would be my final Smith Rock climb as a student of the Mazamas Adavanced Rock class.  My first move involved stepping out of the security of the belay ledge toward a narrow crack that ran upwards to a overhung rock ceiling.  Below the crack there was a intimidating drop off to the ground.  I was struggling to commit to the first move.   Not only was I afraid of the exposure, but of swinging too far forward as I moved into the crack.  I told my climbing partner Ron that I could not do it.  He told me that I could and pointed out a foothold that I had not seen.  It took a little while, but the moment that I had been working towards all of these months realized itself.  I made the committing move forward and found a good foothold.  Trusting that my feet would hold I found that the crack offered great handholds, allowing me to place a piece of rock protection.   My confidence kicked in and I knew I could climb this crack.  Another illustration of the first step being the hardest part. 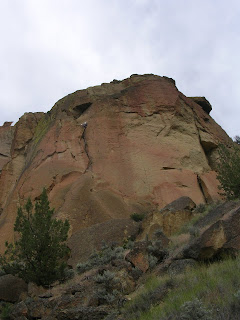 The day before I had returned to Smith's Red Wall and climbed the Moscow route (below).  This time I was followed by coordinator George Cummings.  George is one of the pioneers of Smith Rocks and has made several first ascents in the park  Part of the appeal of the Moscow route is that it was a pure traditional route, meaning that there were not any bolts to build an anchor.  So when I realized that I had climbed past the ledge which is typically the end of the second pitch (whoops), I just started plugging in rock protection into the crack and built an anchor there. 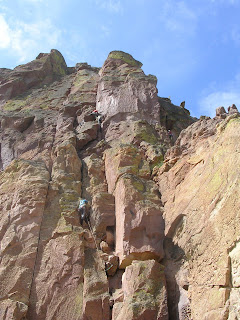