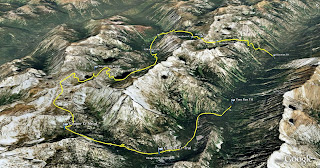 I spent the Labor Day Weekend backpacking in the Wallowa Mountains, leading a group of Adventurous Young Mazamas.
We started at Two Pan Trailhead and followed the West Fork Lostine River.  At the Cooper Creek Trail junction we forded the river and ascended to high alpine meadows.  After reaching the highest point of the trip we descended down to Swamp Lake, were we spent the first night. 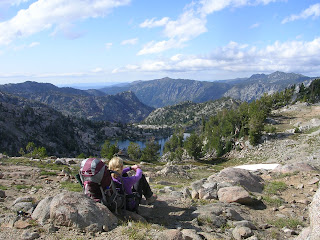 A cold front was moving through the region, so it was not a surprise that we awoke to frost on our tents.  After drying off the tents we set out over a minor ridge and descended to Steamboat Lake.  From here it was a long descent into the North Minam River Valley.  We hiked through this pleasant valley, passing by the meandering river and tall green grass.  Then it was up a series of switchbacks to the Wilson Basin.  We found a covered campsite near the spur trail that goes to John Henry Lake.  We were expecting another cold night, so we built a quick campfire to lighten things up.  Any concerns about our  campfire spreading were extinguished when the snow started to fall en force.
The temperature in the tent was 36 degrees when I checked my watch the next morning.  We broke camp and then ascended to Wilson Pass.  From here the views were enhanced by the light dusting of snow on the distant mountains.  We said goodbye to the Wilson Valley and descended into Browine Basin.  From here the switchbacks lead us down to the Bowman/Francis Lake Trailhead. 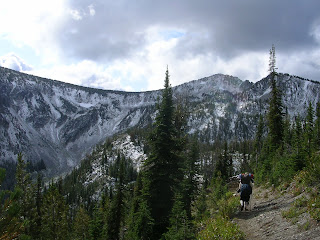 The parking lot at Two Pan Trailhead was overfilled when we arrived.  Thankfully most of these people were headed to the Lakes Basin area up the East Fork Lostine River, so we were spared sharing our outdoor experience with the masses.  As the leader, I got a lot of experience balancing the needs of the experienced and novice members of the group.
In my previous post I wrote about William Ashford's adventures in the same mountain range.  His first attempt to scramble up  Sacajawea Peak was aborted when a sleeping bag fell loose and tumbled down a gully.  I could not help to smile as I recalled this passage while helping one of my fellows readjust his sleeping bag on his pack.
Posted by Andrew at 10:28 AM

I'm new to throwing knives. These are really fun to throw and have held up quite well top article. The Paracord kept coming loose and this hyperlink made them difficult to release so I removed it. Overall, great product

Additionally, their flexibility and willingness to make requested changes made for an ideal partnership.spela utan spelpaus

The work increased the functionality of our analytics products. creative web design company