Getting Grounded at Home 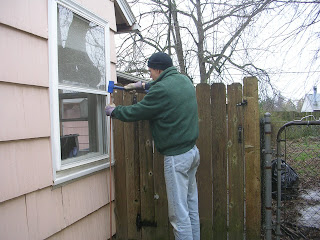 This morning I dodged raindrops as I pounded a Grounding Rod into the ground.  I was burying this six foot rod of copper into my east flower bed for the new phone box that Qwest had installed.  Earlier I had checked with all the utilities to make sure there were not any surprises buried underneath.  Then I borrowed a sledgehammer from a neighbor.  This had all started when the phone line went dead late last month.  After the Qwest technician had fixed the problem I found out they would install a new box for free.  At that time I had two old fashioned telephone boxes and a mess of wiring.  So the new box got installed and the outside wiring got simplified.  I just needed to provide a grounding rod so the Qwest Tech can come by later and ground the box.  Mission accomplished.
Then gave my bike a much needed bath. 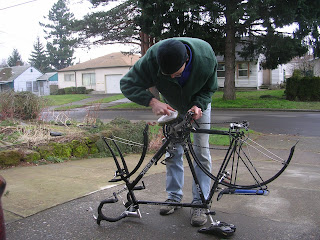 Commuting by bike at this time of year makes for a very dirty bike.  Monday I drove because I had a meeting in the evening and Tuesday I thought the roads were too slick to bike.  But the rest of the week my bike had plenty of chances to attract some dirt.
I also did some yard work.  I am very excited because the daffodills that my neighbor Celeste gave me are starting to poke out of the ground. Celeste passed away last year, so these flowers will be a nice memorial of her.
Posted by Andrew at 4:20 PM