Four years ago some Scouting friends and I attempted to climb Mt. Olympus. It was a stellar experience which introduced me to the monarch of the Olympic Mountains. I was impressed by all of the gems that were found along the route. Starting with the awe inspiring old growth along the Hoh River Valley, followed with an incredible crossing over the Hoh River, and then the beautiful Blue Glacier and it's incredible ice-fall, this climb offered so much. 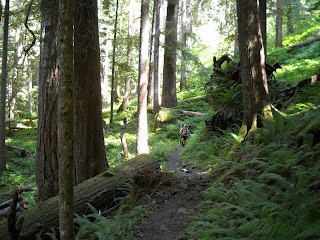 I knew that I wanted to return, so I scheduled a Mazama climb starting the first weekend in August. Having already visited this area, I knew it would be demanding. It is a 18 mile backpack to the Blue Glacier. While Olympus is just 7969 feet tall, the trailhead is at 573 feet, making the elevation gain significant. Along the way our team was constantly helping each other heft our heavy backpacks to our backs. 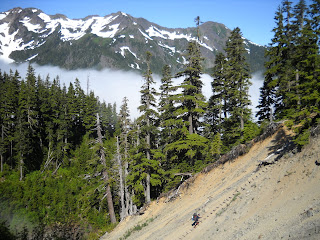 Just short of the Glacier Meadows campsite we had to carefully descend down a rope ladder into a gulley that has been plagued by avalanches.

At Glacier Meadows we awoke early from our slumber and made our way up to the crest of the lateral moraine of the Blue Glacier. Even though I had been here before the sight of the glacier and the Snow Dome took my breath away. The glacier was in excellent condition from crossing, with most of the crevasses still sealed away by a thick layer of snow. 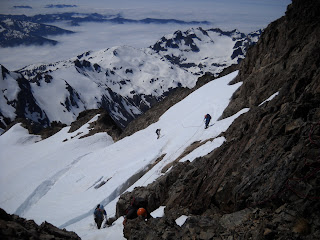 Despite this we still were roped up as we ascended the Snow Dome, passed through Crystal Pass, and went up and over the False Summit. 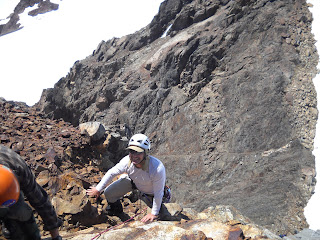 When I was here earlier I had not liked the look of the 4th class scramble across the east side of the West Peak, so I had lugged the rock climbing gear to climb up the low 5th class Crows Nest on the east side of the summit block. The pitch was short but it gave me a good challenge. Soon I was at the summit. I was able place my trusty Pink Tricam and build a good anchor for the rope that the others would use to protect their ascent. 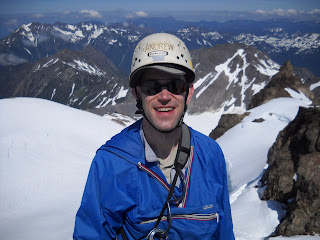 We were blessed with outstanding weather and surrounded by the snow capped peaks of the Olympic Range. In the distance we could see Mount Rainier and the low clouds that covered the Pacific Ocean and the river valleys. We carefully rappelled down the same route that climbed and prepared for the long march home. Our summit day was a long one, but we were back at base camp before headlamps were necessary.

I had planned for a two day hike out so we could savor this wonderful landscape. On our final night we camped out on the Hoh River gravel bar and enjoyed a campfire.

During much of my journey here I thought about those who accomplied me here during my first trip here. So to Scott, Kristine, Anton and Anne I am grateful to you for helping me make this a successful climb.

I have great memories of that trip too, Andrew! Thanks for the "shout out" !!! So glad you returned and had a great hike. --Anne (and Anton)