Most of the major peaks in the Pacific Northwest are volcanoes. However, in Washington's Central Cascades you can find one notable exception: Mount Stuart. At 9415 feet Mount Stuart is the second highest non-volcanic peak in Washington State. It has been pronounced the largest mass of exposed granite in the United States and it features are variety of routes of varying difficulty.

We approached Stuart from the South Side, which lacks the glaciers and technical difficulty of the North side. However, as you can see from the photo above, there are numerous gulleys that can confuse the unprepared. Our route, the Cascadian Couloir, is considered the descent route for other routes but should not be underestimated. 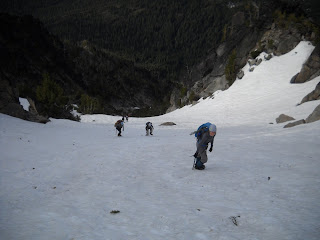 Due to lingering snow we had the luxury of ascending the couloir via moderate angled snow slopes. Normally climbing parties cut underneath the false summit and scramble to the true summit. 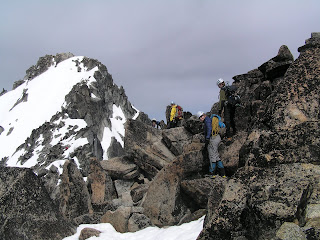 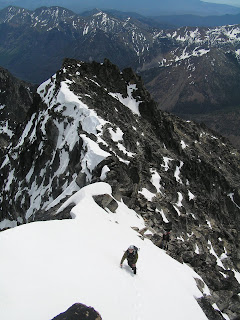 As we approached the summit we could appreciate the shear drop off to the north down into the Enchantments. 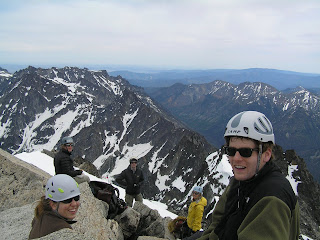 From the summit the glory of the North Cascades unfurled below us. We could see as far as Mt Adams to the south and I am certain that Canada was within our gaze. The surrounding area was studded with snow covered mountain peaks.

During our descent a couple of snowflakes fell upon us momentarily. Perhaps it was the mountains reminding us of the influence they have upon the weather.

I had scheduled a day after our summit push to hike out over Longs Pass and to the trailhead. In retrospect I was glad to do so. Our basecamp was on the edge of a pleasant meadow that many of us took the time to enjoy and contemplate.
Posted by Andrew at 5:33 PM

Hi Andrew,
The roadside reststop may claim Mt Stuart is the largest granite exposure in the US, but they may be forgetting the Sierra Nevada Mts. Yosemite granite is rather nice to climb on too. Or they're splitting hairs on what qualifies as granite or what is in the US. ;)
Scott