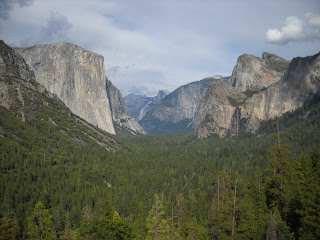 Ever since my acceptance into the Mazamas Advanced Rock class, I had been looking forward to their trip down to Yosemite National Park. While I had no plans of big wall climbing in this cathedral of rock climbing, I relished the chance to practice my newly learned trad lead climbing skills on the world famous granite.

Then in July I stumbled and landed on my left thumb. The injury was not serious, but damaging enough to curtail my climbing plans. So instead I planned to climb with my feet and explore by hiking and backpacking.

Our class set up base camp at a campground overlooking Saddlebag Lake on a pass at an elevation of 10000 feet. For you Oregonians out there, that is like camping at the base of Mt. Hood's crater. Even though it was just outside of Yosemite's Tioga Pass entrance, it offered more peace than the car camping options inside the national park in a beautiful alpine setting. 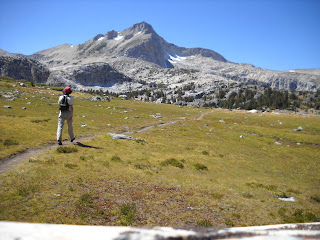 While my colleagues were out climbing, I took a handful of hikes. My first was was to the top of Mount Hoffman, near the geographic center of the park. I also took a short hike amongst the Giant Sequoias in the Tuolumne Grove. Then went down to Yosemite Valley and braved the crowds and explored some of the meadows. On the way out of the valley I stopped at Tunnel View and understood why this place is known as the 'Incomprehensible Valley'.

The highlight of the trip was three day backpacking trip from Tuolumne Meadows down to Yosemite Valley. Monday morning I was dropped off near the Tuolumne Meadows Lodge, elevation 8600 feet. With my wilderness permit and bear canister loaded in my backpack, I headed down the Muir trail and then headed south along Rafferty Creek. After gradually gaining altitude I found myself at the Vogelsang High Serria Camp. As I ate lunch at Fletcher Lake I soaked in this glorious high alpine setting. It got even better as I hiked past Vogelsang Lake and then up to Vogelsang Pass (elevation 10600 feet). My breath was taken away as I rounded the corner and saw the water tumbling down the from Gallson Lake. Below me was the Lewis Creek Valley. As I descended down this valley the creek would slide down slabs of granite. In the distance grand granite domes rose above me. My final mile was a pleasant walk through the shaded forest to the backpacker's campground at Merced Lake. Here I found a flush toilet (such a luxury) and friendly companions that invited me to join their campfire.

Tuesday morning I broke camp and followed the Merced River to Echo Valley. At the trail junction I was startled when a cinnamon colored bear crossed my path. It was not that big, so I paused a looked for mama bear. After awhile it appear that this bear was out solo so I pressed onward. Above me I heard the woodpeckers pecking out insects from the bark, a reminder of home. I gained some altitude and soon found myself above the Merced River valley. Here I was looking down into the Lost Valley, dominated by the impressive granite dome of Bunnell Point. I rejoined the John Muir trail and set up camp at a trail jucntion with good water access. I loaded up my fanny pack and started up the trail to Clouds Rest. The view of Half Dome and the Yosemite Valley got better as I rounded each switchback. Then the big surprise of the day, a hiker that was descending the trail recognized my voice. It was Chris Bibro, a fellow Mazama, who was backpacking with his girlfriend. Chris told me the view from Clouds Rest was spectacular and he was not kidding. At 9926 feet elevation, I was looking down on Half Dome and the Yosemite Valley. Not far away I could see Mount Hoffman plus I could make out the route that had brought me here. After lingering at the summit for some time I descended down to my campsite to rest for my day three. 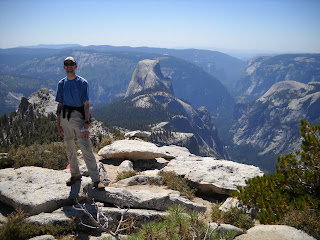 Tuesday morning I broke camp and headed down the John Muir trail to the Half Dome trail junction. I read that bears were active in this area, so I left my backpack behind, separating my stove and bear canister. Gradually the trees thinned out and I found myself at the base of Half Dome's Cable Route. This is the famous final 400 feet via two cables strung between poles that rest in holes drilled in the steep granite face. As I ascended I got into a rhythm with my arms doing most of the work pulling myself up. The time I spent climbing on granite at City of Rocks gave me the confidence to trust that my feet would hold. The view was worth every step of the way. My efforts to get up here early paid off as I did not have to deal with too large of a crowd as I descended. Downclimbing involved communicating with those who were ascending as the space between the cables is too narrow for two people. 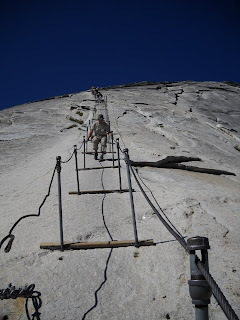 Back down at the trail junction I discovered that chipmunks had gotten into my backpack. I found one of my chemical hand warmers 20 feet from the backpack. Better them than bears. I descended down into Yosemite Valley, enjoying the view of Nevada Falls. During this trip I had seen some incredible sights, but none were as welcome as my car waiting for me at the trailhead.

But this was not the last chapter of this backpacking adventure. The Big Meadows fire had broken out in the National Park, closing a critical road for my return to Saddlebag Lake. A drive that should have taken 2 hours lasted 4.5 hours. When I finally made it back to home base all had retired for the night and the last of the campfire embers were fading.

When my time in Yosemite had ended, I drove north to Truckee to visit my cousin Eric and his family. We had a wonderful picnic dinner at Donner Lake and then later I got to read bedtime stories to his girls. The next morning I packed up one last time and drove home.

You can see more photos at this link.
Posted by Andrew at 8:00 PM

I guess if you're going to leave the Olympics, Yosemite sounds like a good candidate for second choice. :)