Two years ago, Paul Steger and I ditched our plans to to climb the Bailey Traverse in the Olympic Mountains when the weather went south.  We ended up fleeing east for four days of scrambling in Mount Rainier National Park.  It was a great example of having a viable alternative plan.  Last weekend I played the Plan B card again, when high winds were blasting the Columbia River Gorge.  Initially I wanted to stick with my plans to hike at Cape Horn on the Washington State side of the Gorge.  However, the winds at our assembly point at Gateway Transit Center in Portland were just brutal.  I figured they could only be worse in the gorge, so I suggested the Clackamas River Trail as an alternative. 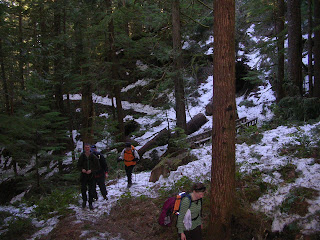 Although it was a longer drive to the trailhead, the mileage and elevation gain were about the same.  My guess that the winds would be gentler was right on, but I was not aware that a previous wind storm had wrecked havoc with the trail.  There were countless trees that had fallen across the trail.  There was snow, but thankfully it was solid and our steps were not sinking down. 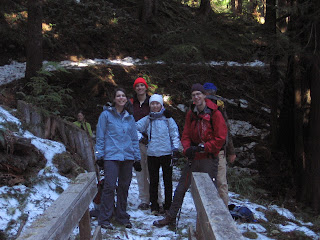 Our progress was slow - I think we hiked about 2.5 miles in two hours.  We did not make it to Pup Falls for a lunch spot, but it was still a pleasant day to be outside with good company.  I learned something valuable about alternative plans as well.  Ideally the alternative is similar to the original plan, deeper snow could have made our hike even shorter.
Posted by Andrew at 8:17 PM