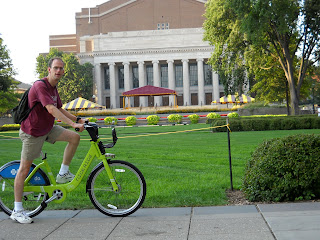 Monday I found myself biking in the city that is rated the friendliest for cyclists. No, that city is not Portland, although it has had that distinction in past years. This year it is Minneapolis that can make that claim according to Bicycling Magazine.
While visiting for the day I found a public bicycle sharing program that may have impressed those magazine editors. For only $5 per day I could borrow a bike for a 24 hour period. The catch was that I after 30 minutes I would have to pay a $1.50 per hour Use Fee. I could avoid that fee by returning the bike to one of the Nice Ride kiosks. Of course I would be able to check out another bike and reset the clock.
I found this was a good system for short term use. The trick was keeping track of the clock and planning my trip out so there would be a kiosk along my path. I was able to bike along the Mississippi River and across the new Stone Arch Bridge. I also crossed over the Washington Avenue Bridge and was able to explore the University of Minnesota Twin Cities Campus. Since I was just visiting for the day, I choose my path carefully since I did not have a bicycle helmet.

As usual, exploring by bike was more invigorating and I could cover more ground.
Posted by Andrew at 1:47 PM