During the Summer of 1979 my parents took us car camping at Big Lake, near Santiam Pass in the Central Oregon Cascades. To the south is Mt. Washington, the basalt plug of a shield volcano that glaciation has eroded over the years. I think back then I was more interested in catching tadpoles from the lake than the tall tower of lava to the south. My parents did remind me that we took a hike to Timberline with some family friends and watched some our party continue onward to scale that peak. Little did I realize that 19 years later I would choose to explore this imposing looking peak. 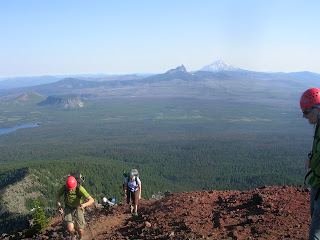 This time we were under the leadership of Eugene Lewins, rumored to be the most flexible of all the Mazamas Climb Leaders. I'll let you figure out if I mean that figuratively or literally. Anyway, it was hot when we left Stumptown, but as we drove east into the Cascades the temperature became more bearable. At one point we crested a high point to discover that we had a incredible full moon serving as our natural headlamp. Our team assembled at the trail access to the Pacific Crest Trail near Santiam Pass for a quick pre-climb meeting and to catch some sleep.If there was any theme to this climb, it would be teamwork. The weather forecast called for thunderstorms in the afternoon, so our team of nine climbers needed to move along efficiently. Adding to the complexity was that we were not the only ones climbing the North Ridge of Mt. Washington. There were at least three other parties on this route. To keep us moving, Eugene had a couple of ideas for belaying the group up more efficiently. Then while others were being belayed up the first pitch, he would go about setting the fixed lines for the next two pitches. It didn't work exactly as he had planned, but he allowed the rest of us to improvise and make it so it did work. The level of climbing experience of the participants on this climb allowed the climb leader to empower us to work out the details. While the first pitch was a bottleneck, it was not as slow as it could have been. It was truely a team effort. 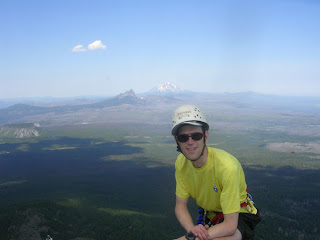 One of the highlights of this climb for me was the rappel. I have been hearing about this airy rappel for years. After injuring my right knee during a rappel in April, it was encouraging for me to successfully make it down without swinging to slide, as I have struggled with in past rappels. We also excelled as a team on the descent down the scree field to the base of the mountain. Another group descended about the same time as us. The had chosen a route that had larger rocks and were going down in a haphazard way, knocking down several large boulders along the way. We just stopped and waited for them to be clear. 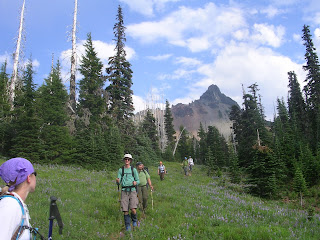 This was the most technical climb where I have been the Assistant Climb Leader. When I had planned out my summer, I set it up so that my climbs would build up to this one. To be part of this team truely was a pleasure.

There are more photos to view if you click here.

The particular month-to-month meetings are excellent, they provide me excellent guidance how to improve my opportunity. click

Their team was timely, reasonably priced, and very proactive throughout the engagement. design companies San Francisco