The day of my second Climb Leader Development teaching evaluation started out with a very early meeting at the Gateway Transit Center.  From here I carpooled up to Mt. Hood's White River West SnoPark with two other Mazamas.  After passing through Sandy, Oregon we were traveling on snow when the car hit an ice patch.  The Subaru Outback crossed into the other lane of traffic and started to rotate counter-clockwise.  Our driver managed to position the car so that only the right end of the front bumper bounced off the guardrail.  After completing a 360 degree turn we returned to our lane of traffic.  We were fortunate that there was not any traffic in the other lane at this early hour.  At this point our decision to leave a little earlier seemed like the right call, as we slowly made our way to the meeting place.  After surviving this I have a greater respect for the dynamics of driving on snow. 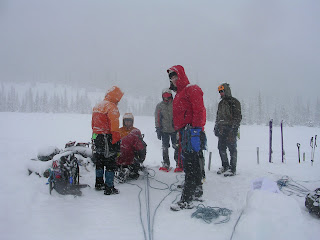 Today the focus was on Crevasse Rescue.  The sky was overcast, in the 20s, and snow was falling.  I found out that the Climb Leader that was supposed to evaluate me had called in sick.  All of the other Climb Leaders were evaluating other Leadership Development canidates, so I was put on standby.  I was eventually paired with some of the students that were running late.  One of the coordinators for the class  would complete an evaluation of me.
The morning went by quickly as our group practiced the basics of various hauling systems.  I was working on my own with two students.  In the afternoon we practiced a couple of more elaborate systems.  Generally students were in three person rope teams.  One would simulate falling by putting weight on the rope, giving the other two students a feel for working with a loaded rope.  As this took place an instructor would watch as the other two climbers set up their pulley hauling systems.  Since I was the lone instructor in our group and there were only two students, I had a bit of logistical challenge.  However, we did fine with the cards that we were dealt.  A couple of times we collaborated with another group, which was helpful.
The drive back to the Gateway Transit Center was uneventful.  When I returned home I found snow on my front lawn.
Posted by Andrew at 8:52 PM